Two years ago, I watched Dr. D-Flo’s first CNC milling machine conversion. At that time, I thought that guy was crazy… One year later I decided to join the craziness!! After many posts on this forum, the Centroid CNC forum and watching Franco CNC and Clough42 YouTube channels, I decided to convert a PM833-TV.

Before describing the build, I wanted to share an uncrating solution. There are a number of videos showing how to remove PM-833 from the pallet. I thought they were dangerous and cumbersome. Instead, it took me and a buddy 15 minutes to use a Sawzall to cut and shim the pallet so we could pick it right up with a 2-ton hoist. Here is what it looks like:

To maximize performance and keep costs reasonable, I decided to use two 1200 oz. and one 1700 oz. closed loop steppers from Stepper Online and a Centroid Acorn controller board. Since most conversions I researched used an open loop 2800 oz. monster stepper for the z-axis, there was some concern that using a 1700 oz. stepper may not have enough oomph and may not be able hold the Z-axis from crashing downward when power was removed. I decided to take a chance on this 1700 oz. stepper after watching Sean’s post “PM-833 with Heavy Metal Kit” on this forum. Sean added gas struts to off load the z-axis. This would greatly help the 1700 oz. stepper and solve the downward crashing problem. Thank fully this 1200/1700 oz. stepper configuration has worked out perfectly. The Z-axis zips up/down at 150 ipm with ease. Here is an image of the control panel:

One of the challenges of my choice of steppers is that I did not know if the 1700 oz. stepper would work without the gas struts, therefore I had to machine the strut brackets prior to taking apart the mill. Furthermore, I had never touched a milling machine before, so I had to learn quickly. I milled these brackets (Far less elegant than Sean’s brackets) with the mill still mounted to the shipping pallet. Chips covered my entire garage floor. Here are images of the brackets for the struts:

Here is the strut mounted:

I also questioned the need for a chip pan for the mill, and how I could minimize the size of the enclosure (see previous posts). I decided to use a solid core door, modify its size and laminate it with a high gloss Formica for the base of my table. This would allow me to nix the need for an oil pan by having a base that was oil resistant. I really did not want the oil pan as no oil pan = easier chip cleanup. The finished encloser measures 61 1/2" x 43 1/2"

Here is the image of the solid core door before and after lamination:

CHALLENGES ALONG THE WAY

OBSTACLE #1
My conversion was based upon using the Heavy Metal Kit from Bruce Nelson. Unfortunately, I believe I purchased the last kit he shipped before sadly passing away at age 58. I quickly found that the holes on the mounting brackets did not align with any of the holes on my mill

After a small panic attack I connected with Dr. D who offered to scan the brackets and make them with the correct dimensions. Dr D. sent me Fusion drawings so I could 3D print them for test fitting. He then machined new brackets that had the fit and finish that one could only expect from a Jewler!

Here are a few test models:

OBSTACLE #2
After assembling the mill with new shiny brackets, the y axis was making all sorts of noises. I had questions about the x axis as well. The problem seemed to be coming from the ball nuts. I reached out to Dave Clements from Arizona CNC. These guys make a number of highly praised conversion kits for other PM machines. Dave bent over backward to help me with these defective ball nuts. He completely rebuilt the ball nuts that now have less than .001 of backlash. He even sent me better quality coupling and bearing for the x and y axis. He is definitely the go to guy for CNC conversion kits. Better yet he is about to release a kit for the PM833.

OBSTACLE #3
I had the same problem that Sean had with some of the brackets. The diameter of the hole in the bracket was too small for the bearings. It was rubbing against the inner race of the bearing on the Y-axis. Dave C to the rescue again. Dave put the bracket on the lathe and bored out the hole. I think he felt bad for me as he would not take any $$.

OBSTACLE #4.
Same as #3 on the Z-axis bracket. This time I put the bracket on my own lathe (the lathe I bought in conjunction with the mill that I had never used). I had beginners’ luck and was able to bore this out:

POWER DRAWBAR
One of my goals with this conversion was to install a power drawbar from Priest Tools. I must mention that Greg Priest was over the top helpful in assisting with some minor issues. His kit was well thought out and organized. Moreover… It works fantastic! I did not use the supplied drawbar switch and moved the valve into the original VFD control box. See rigid tapping below.

RIGID TAPPING
Just a quick comment regarding the OEM spindle motor. The spindle motor name plate indicates a four pole, 2HP 1725 RPM motor. This confused me prior to receiving the machine because the only way you can achieve a 3200 RPM spindle speed (That is the rated spindle RPM for the PM833) is by gearing up the speed via the belt. This would result in terrible low-end torque.

In reality, the OEM motor is further balanced and modified to run at a top speed of about 7500 RPM. With about a 2.34:1 reduction, the spindle will max out at 3200 RPM. The folks at Centroid suggest that rigid tapping be done at a starting speed of 640 RPM. With a spindle speed of 640 RPM, the motor would turn at about 1500 RPM which is about 85% of the motors base RPM. This should provide plenty of torque for tapping at this speed. The Centroid folks also suggest that if the z axis does not have too much inertia and is fairly nimble (another reason to use gas struts on the z axis), you can perform rigid tapping between 1000 - 2000 RPM’s. I have completed 99% of this build but have not had the time to setup the rigid tapping parameters. To be continued.

Dr. D was nice enough to share the Fusion file for the gear he developed to fit over the spline shaft of the mill. This is the gear that picks up the spindle speed. I modified it slightly to allow me to print it with a Prusa filament printer. The top flange of the gear WAS identical to bottom. I modified the top flange with a bevel to allow for better printing without an SLA printer.

Here is the sketch:

I also mounted the encoder on top of the original speed control box that now houses the power drawbar solenoid valve, drawbar switch & pilot light. The braking resistor for the VFD is mounted to the rear of this box.

One Shot Lube System
I read numerous posts regarding the fact that the One Shot Lube system on this mill leaks and does not get the lube where you need it. I previously posted my solution on this forum. In short, I used a 6 way manifold and check valves to meter the lube where you want it to go and not leak backward. I also put marine silicone on all the internal fittings. It works great. No more leaks… Lube where you want it. It cost about $100.00. Here are just two images. 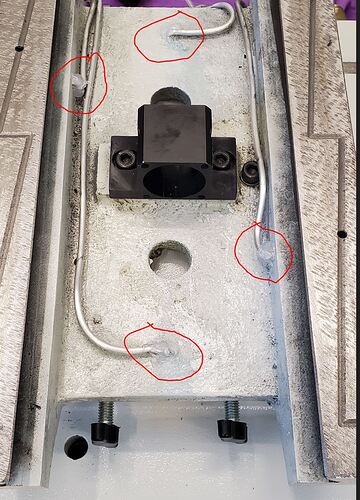 Here is an image of the finished mill:

FINAL THOUGHTS AND COMMENTS
This mill project has been loads of fun. With zero previous experience, I could have never done this without the help of the Online community. Dr. D literally saved the show by helping me with the mounting brackets. Dave Clements from Arizona CNC saved me again by rebuilding the ball nuts. The documentation and support for the Centroid Acorn board are amazing. While I have an EE and ME degree from over 40 years ago, I never practiced engineering. These guys are top notch, and the product is easy to use. Their support forum has hobbyist and seasoned engineers willing to jump in and help.

Another great resource, Automation Direct. I used the DuraPulse GS21-22P0 VFD suggested in Dr D’s video. Before purchasing, I called them and spoke with the product specialist Steve. He knew the 500+ page manual for this product from memory. In 15 minutes, he went through all steps needed to fully program the VFD. We even programmed it to close a pair of dry contacts to start an auxiliary cooling fan for the spindle if needed. I don’t think this will be the case. I have all of the settings documented if needed.

I also learned about steppers, servos etc. from YouTube Franco CNC. My enclosure was inspired from James Clough (Clough42 on YouTube). I never used a CAD program and learned how to draw from YouTube Products Design Online (Fusion 360 in 30 days).

Now that my machine is done, I have to learn how to use it! I am following the online 10 part Titan’s of CNC building block series.

To complete this conversion and learn how to draw, I have made many 3D printed parts that I would be happy to shear:

I am currently printing a bracket to hold a way cover for the Y axis. I will post shortly. There are several others that I will post as well.

Fantastic post! Great pics. I finally have mine running as well. Hopefully I’ll get it trammed this week.

Excellent work! The whole build is very clean. I think my favorite upgrade is the enclosure - cost-effective and allows for the full cutting capacity of the mill. Also, the swing arm for the monitor is great!

Thanks for the nice words!

Here is the way cover that I just finished. The pleated cover is from McMaster-Carr (McMaster-Carr)

I 3D printed the bracket and drilling template. I would be happy to share the files.

I am very much looking forward to seeing your next YouTube on upgrading the spindle bearings. While I think the stock motor is ok, at a spindle speed of 3200 rpm the motor is cranking at 7500 rpm. If you like to machine aluminum, this noise can be annoying after some time. I am guessing that the Black Max motor would be quite a bit quiter.

Hey Robbie…Just curious if you got your mill trammed and running? How is it going?